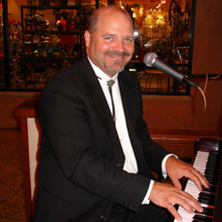 John Callaghan, piano teacher at the NJ School of Music, was born in Philadelphia, son of Joseph W. Callaghan, a pianist, composer, teacher and choir director. Growing up as the son of a piano teacher John was exposed to many different kinds of music. Music was constantly heard or being played by any of the nine members in the Callaghan family. John studied piano with his father until age 13. He was then privately tutored by concert pianist Gail Ofterdinger, studying classical form and composition.

John, at age 14, started performing with various rock and jazz acts in the Philadelphia area. After attending Temple University John embarked on a full time music career as a pianist, organist, arranger, songwriter, and band leader. By 1982, he was performing in top name bands at the Jersey Shore. These bands include; "Hot Flash", "Syn" and "Cheers the Band" which was named Lounge Act of the Year in 1985 by Atlantic City Magazine. Through the 80s and 90s John was musical director for several acts appearing in Las Vegas, Atlantic City, Wildwood, and Pocono Resorts. He performed at the Aladdin Hotel Casino in Las Vegas in 1987-1988, appeared in Atlantic City's "Superstars Live" at Bally's in 1991, and played the Forum Lounge Piano Bar at Caesar's from 1992-1997, and then again from 2000-2003. In 2005, he became a member of the "Jon Lewis Orchestra", as well as an accompanist for vocalists appearing at "Tangos Piano Bar" at the Tropicana Hotel and Casino. In 2006 John placed 2nd in the Philadelphia Flyers Arena Organist Competition. He performed at the "Flyers Wives Fight for Lives" carnival in 2008 and 2009. John is also a 20-year member of the "Original Dueling Pianos", a sing-along piano team who do specialty performances at clubs and beach bars from New York to Maryland. He was musician/arranger for Williamstown High School Cabaret Night in 2009, performing new and classic songs from the Broadway Stage and beyond. He is a member of "Brandywine Valley Talent", an agency providing music for corporate and private events. Mr. Callaghan was guest lecturer and performance judge at the South Jersey Teen Arts Festival held at Stockton University from 2004-2006.

As a songwriter, John has recorded three full length CDs, has had four songs placed in documentary and independent films, and has won runner-up and honorable mentions in various songwriting competitions. He also co-wrote a song on the nationally released CD from the band, "Bugzy", released in 1997.

Mr. Callaghan, is the owner/operator of Ignatius Studios, located in Williamstown and on the web at www.iggymusic.com. Ignatius Studios specializes in jingles, custom-made karaoke tracks, singer-songwriter demos, and full band recording sessions. John is also accomplished in electronic music, synthesis, and "midi sequencing".

Piano lessons with John are available Monday through Wednesday.